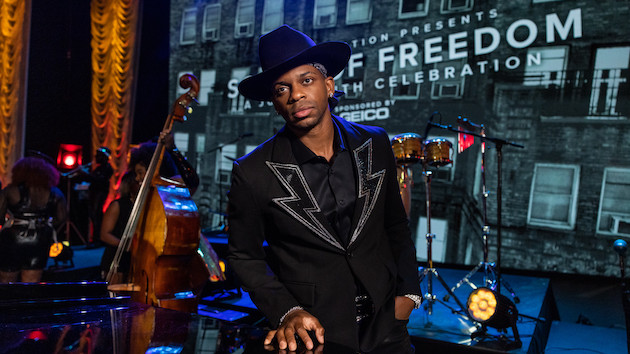 Jimmie Allen is commemorating Juneteenth tonight with a hosting spot celebrating the holiday, and Black Music Month, with performances from an all-genre array of stars.

Called Sound of Freedom — A Juneteenth Celebration, the special is part of ABC News’ Soul of a Nation series. The event will feature performances from Patti LaBelle, Marvin Sapp and Jon Batiste, plus conversations with Ciara, Jimmy Jam and Terry Lewis, who will address the importance of ownership in music with ABC News’ Janai Norman.

Another segment will feature correspondent Rachel Scott, putting a spotlight on some of the “all-Black production teams behind major artists and groups.”

The special will air on Friday at 8 p.m. ET on ABC. The following day, it will be available to stream on Hulu. It’s the third year in a row that the network has produced the special, but according to co-executive producer Catherine McKenzie, it is one of the most important specials to date.

“From gospel and country to jazz, rock and today’s pop hits, every genre of American music is influenced by the Black Diaspora and our stories of survival, joy, pain and resilience,” McKenzie says in a press release. “We’re looking forward to taking viewers on this musical journey in one of our most significant specials yet.”

Co-executive producer Quiana Burns adds that it’s “a must-watch for all viewers.”