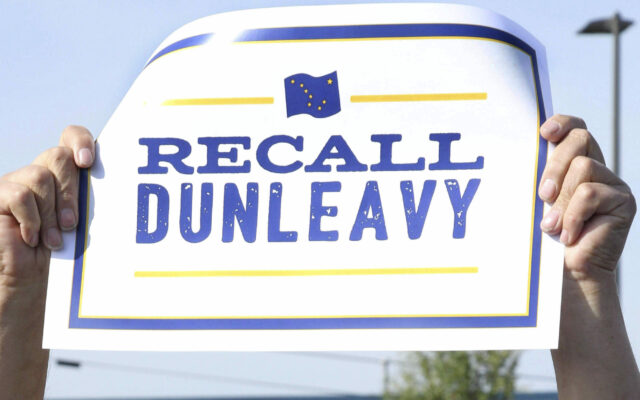 The Alaska Public Interest Research Group and 907 Initiative, which advocates on civic and social issues, said the complaint was filed Tuesday with the Alaska Public Offices Commission. It was filed against the Dunleavy campaign, the Republican Governors Association, the third-party group A Stronger Alaska, and Brett Huber and his company, Strategic Synergies LLC.

The parties have “blurred and overstepped all lines of separation that must exist between an official campaign and a group performing independent expenditures,” the complaint alleges.

Huber called the complaint a “negative campaign tactic. They’re completely off base.”

The complaint says the only donation A Stronger Alaska has received was $3 million from the Republican Governors Association shortly after the group was formed. It says key figures with the group have ties to that association.

The complaint raises concerns with contracts that were between the governor’s office and former staffers Jordan Shilling and Huber. It says Shilling is managing Dunleavy’s campaign and that Huber and his company have been paid for consulting by A Stronger Alaska. Dunleavy campaign spokesperson Andrew Jensen said by email that Shilling is listed in campaign disclosures as a deputy campaign treasurer.

Jensen by email said the campaign was reviewing the complaint and had no immediate comment. The Associated Press sent emails seeking comment to the Republican Governors Association, A Stronger Alaska and to Shilling.

A copy of the contract with Shilling, provided by the governor’s office in May, was for consulting on renewable energy policy development and implementation. It was set to to run from April 25 to Sept. 24.

Huber said Tuesday that he has not participated in any coordination.

“I know the rules well and I’m following them all,” Huber said, adding later: “Last I checked, it’s OK for me to make a living. I am a political consultant, under contract with the RGA.”

Huber said he has not had the contract with the governor’s office for months.

Huber managed Dunleavy’s successful 2018 gubernatorial campaign and became an aide to the governor after Dunleavy took office. He left state employment to work on an unsuccessful campaign against a 2020 voter initiative that ended party primaries and instituted ranked choice voting for the general election.

Huber returned to state employment last year as a senior policy advisor for “statehood defense” issues but left earlier this year, on April 2, the governor’s office has said. He signed a contract later that month with the governor’s office for research and consulting on the “broad issue of ‘Statehood Defense,’” according to a copy provided to The Associated Press in May as part of a records request.

That contract was to have run from April 25 through Oct. 24. However, Jeff Turner, a spokesperson in Dunleavy’s office, said Tuesday that Huber canceled the contract June 1.