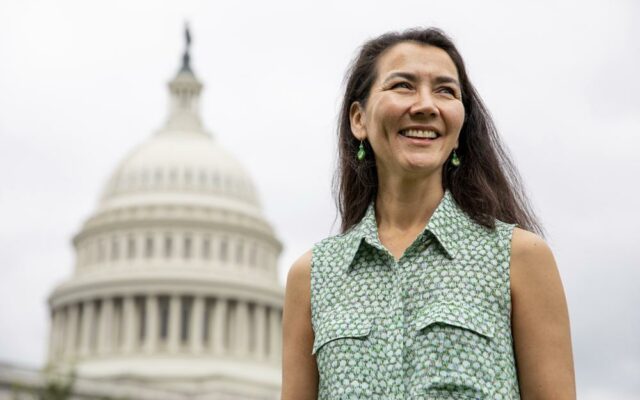 WASHINGTON (AP) — On the eve of her first day in Congress, Mary Peltola stood outside what was once the office of the late Alaska Rep. Don Young, swarmed by the local and national press, and marveled at the moment.

“I really hope that Don is getting a kick out of this,” Peltola told The Associated Press in an interview Monday. “I can’t help but think that some things broke my way on account of his great sense of humor.”

The kicker is that 50 years ago, right before Peltola was born, her parents worked on Young’s first campaign for the only congressional seat in Alaska. Young won and went on to hold it for 49 years before his death in March.

Last month, on her 49th birthday, Peltola, a Democrat, won the special election to finish out Young’s term, besting a field of candidates that included Republican Sarah Palin, who was seeking a political comeback in the state where she was governor.

On Tuesday night, Peltola, who is Yup’ik, will make her own history when she is sworn in as the first Alaska Native in Congress and the first woman to hold the seat. She previously was a state lawmaker for 10 years representing the rural hub community of Bethel, Alaska.

“To have a seat at the table is different,” Peltola said. “But I am just always reminding people that I’m not here to represent just the 16% of Alaskans who are Alaska Natives. I’m here to represent all Alaskans.”

Two other new members also will be sworn in to office Tuesday evening: Democrat Pat Ryan and Republican Joe Sempolinski of New York.

Peltola’s campaign has emphasized her dedication to “fish, family and freedom.” Fish are a staple in Alaskan life, and salmon holds particular cultural significance to Alaska Natives. A subsistence lifestyle — relying on fish, wildlife and berries — is essential in rural Alaska, including in many Native communities, where goods must be flown or barged in and costs for basic necessities can be exorbitant.

Peltola said she sees her few weeks in office as an homage to Young’s service as a more moderate force in an increasingly polarized Congress. Like the often gruff Young, Peltola said she is bringing a sense of humor to the job, along with a history of being a consensus-builder with even the most conservative of colleagues.

After Palin came in second to Peltola in the special election last month, the two women shared a cordial back-and-forth. In a text message, Palin congratulated her and wrote that she was a “real Alaskan chick! Beautiful & smart and tough.”

Peltola replied, “Your text means the world to me … We really are in this together.”

The newly elected congresswoman’s time in the Alaska Legislature overlapped with Palin’s time as governor, and the women have remained cordial. Peltola has said that one of the most “unsavory” parts of American politics is negative campaigning.

But staying above the fray could prove difficult. Peltola is on the ballot in November to serve a full two-year term, again facing off against Palin, Republican Nick Begich and Libertarian Chris Bye, all of whom advanced from last month’s open primary.

That’s partly why Peltola said she doesn’t plan to get too comfortable in her new office, which Young, a Republican, adorned with the heads of bucks and bears and large rifles in a nod to his love of hunting. Now those walls are bare.

“It didn’t make sense to really become too entrenched, or decorate, or set up shop,” Peltola said. “I really just feel like I’m camping here until the term is over. And then being open and seeing what happens next.”